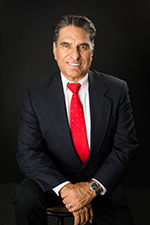 I first saw Arizona when I was stationed at the Marine Corps Air Station in Yuma in 1969. Awarded the honor of being named the “Marine of the Month” for the Marine Corps Air Station in 1970. After my discharge from military service, I enrolled at the University of New Mexico, studying accounting. In 1974, I joined Price Waterhouse and Co. and earned my Certified Public Accountant license in 1976. I subsequently took a position with a publicly traded company where I was the Director of Corporate Accounting. In 1979, I accepted an offer to join the staff of the Securities Division of Arizona Corp. Comm. After a rewarding career in public investor protection, I retired in 2003 as the agency’s Chief Deputy Director. I began my second career as a real estate agent in 2004. I was elected to the Green Valley/Sahuarita Association of Realtors Board of Directors for a 3-year term commencing October, 2008. In November 2009 I was elected Sec./Treasurer of the Assoc. for a two-year term that ended Nov. 2011. Team Rodarte, now the Casa Del Sol Team, was the Pro of the Year for 2006 in Sahuarita/Green Valley and for Long’s Sahuarita office in 2007, 2009, 2010, 2011, 2012, 2013 and most recently 2014. In both 2014 and 2015, I was named as being in the top 250 Latino Real Estate Professionals and achieved the rank of #99 in 2015. On October 2016 I was presented and award as one of the 100 Most Influential Real Estate Agents in Arizona by the Real Estate Executive Magazine. I am privileged to have Jennifer Root as my team partner, on our Casa Del Sol Team.  Our team has received Long Realty's Circle of Excellence Award for 2018, 2019 and most recently 2010. Having been a realtor in Sahuarita since 2004, I have intimate knowledge of this market, which I use to negotiate transactions with very favorable terms for my clients. It would be my pleasure to discuss how I can help you meet your goals of selling or buying a home in this area. Please don’t hesitate to give me a call today!